Dinosaur statue at Kirstenbosch Botanical Gardens in Cape Town.
A walk around Kirstenbosh National Botanic Gardens could do more than just fill your heart with the joy of plants. It could cure your warts, stop your earache and remove the smell from your old boots!Zulu women are known to use the fresh smelling spur sage, ground up and mixed with fat, as a deodorant. Smelly Cape fishermen choose instead to crush the fine white flowers of the 'confetti bush' to remove their lingering odours. Hang the 'skunk bush' from your rafters to keep away flies and stuff some minty 'hottentot bedding' into your mattress to remove fleas and lice.More useful tips on unusual plant use can be found along the aromatic Braille Trail in the Kirstenbosh National Botanic Gardens of Cape Town. For sighted and blind alike, the trail encourages you to compare textures and sniff a variety of not always sweet smells. The remedy you have always been looking for could be right under your nose.

Ernst van Jaarsveld, a Senior Horticulturist at the gardens swears by the sap from the 'mother in law's tongue' cactus which he uses to relieve his children's earaches. Used for centuries in tribal villages as a pain reliever it is also said to cure worms, varicose veins, toothache and piles. 'Pigs ear' will kill you warts with its anti-viral toxins, but it will also kill you if you take a nibble - that is unless you are a tortoise, they adore it.It is to the plant kingdom that scientists look for cures to the most deadly illnesses known to man, and Kirstenbosh often provides plants for this purpose. However, a request from Japan for eight metric tonnes of dried root of 'Don't Touch Me' bush (melianthus comosus), for an unknown use, was an order they could not comply with.

Richest Diversity in the World 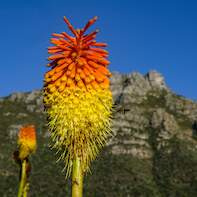 Europe's 10,000 species of plants have been well exploited for medicinal purposes but many of the 21,000 species found in South Africa are yet to be explored for their potential uses. The Cape sub-region houses the richest diversity of plants per square metre than anywhere else in the world.

Most of the plants are endemic i.e. found nowhere else on earth. The Cape plants have their own classification known as the world's Sixth Floral Kingdom, comprising over 2,500 different species known broadly as Fynbos.

Thriving on poor nutrient acid soil they take nitrogen from the air rather than the ground. Under such stress they have developed a remarkable diversity, which against all odds is highly floral and incredibly varied.

Largest of the Fynbos are the Protea bushes whose stunning fist-sized flowers glow like min suns. Perched on these orange orbs are long-tailed Cape Sugarbird cracking the air with agitated chirping and competing loudly with the highly excited chatter of the brilliant iridescent green and red Sunbirds.

Nearer the ground the hardy sandstone loving Erica's flower in millions of tiny purples, reds and blues. A pure white bush in the centre provides a stunning contrast. There are over 800 types of Erica in the Cape while only 23 species are found in Europe.

Such diversity makes Kirstenbosh Gardens one of the most popular places to visit in Cape Town and is on most tourist itineraries. Don't forget to sample, sniff and touch as you walk around and while you are there you can cure your earache, headache, varicose veins, worms, warts 'n all!